Highland Games--Now both Saturday and Sunday, November 12 and 13 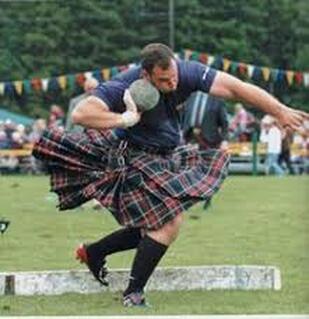 "Stone of Strength" or in Gaelic "Clachneart" is similar to the Olympic shot put. A smooth granite ricer stone, no less than 16 lbs is put from in front of the shoulder for distance. Each athlete is given three attempts and the best throw is recorded. The athlete is allowed an area that is 4'-6" wide by 7'-6" deep where they must keep one foot inside at all times. Additionally, they may not step anywhere behind the back line nor anywhere in front of or on top of the 6"x6" x 4'-6" toe board or "trig". The athlete may use any style they wish, the most common are the "spin", "glide" or "Braemar" which is Gaelic for standing or stationary. 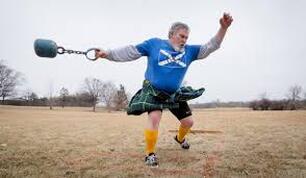 56 lb. Weight Throw- (42 lb. for Master's Class) for distance is probably the most loathed event by the athletes. It has been referred to as "dancing with an uncooperative elephant". The implement is usually made of an iron block with a length of chain followers by a metal ring for a handle. The total length of the implement cannot exceed 18". The unit of measure in Scotland is the stone (one stone is 14 lbs). The 56 lb. weight (or 4 stone) was originally used as a counterbalance for weight measurements when buying or selling in the markets. The athlete is allowed the same area as in the "Stone of Strength" only instead of the 7'-6" run up, they are given a 9' run up. Each athlete is given three attempts.

28 lb. Weight Throw-for distance is the same as the 56 lb. weight throw for distance but only half the weight (2 stone). Because of this, nearly twice the distance is achieved by the throws. 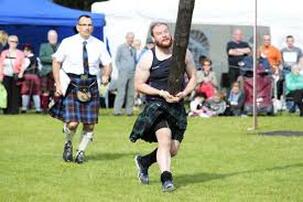 The Caber Toss, probably the most misunderstood of all the events, is the only event where distance/height is not the object. The athlete attempts to lift and balance the Caber leaning against their shoulder. Then the athlete runs with it and tries to flip the Caber end over end so that the end they picked us is the end that points directly away from them. As on a clock face, a 12:00 would be a perfect score. If the athlete does not turn the caber, an alternate scoring method is used by calculating the angle from 0 to 90 degrees. 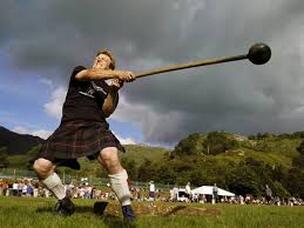 The Scottish Hammer is a round metal ball attached to a rattan cane or PVC handle. Two differing weighs are thrown, 16 lb and 22 lb. The athletes usually wear blades on the front of their throwing boots and dig them into the ground to have a firm foundation for the effort. With their back facing the direction of the throw, the athlete whirls the hammer around his head, building momentum and then releasing. 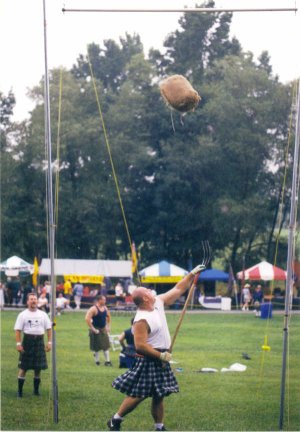 The Sheaf Toss (as in a sheaf of wheat) is a 16 lb or 20 lb burlap sack stuffed with pine straw, rope, or other non-resistive material which is "pitched" with a three tined pitch fork up and over a bar for height. The athlete will usually swing the sheaf from side to side to get the balance of it and then "flick" the sheaf upward. Some athletes have started to use a spin technique with this event also.
Website by Highlands and Islands